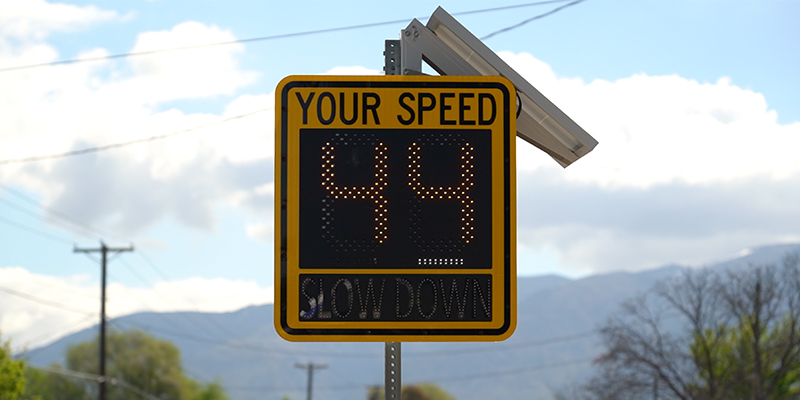 A small city in Western Canada sees a nearly 70% reduction in speeding after installing SafePace Evolution signs in all its school zones.

Melville is a small city in Western Canada with just under 5,000 residents. It’s home to a junior hockey league and a college baseball league. Melville has both catholic and public schools as well as several local parks but does not have a dedicated police force.

In 2019, the Melville school board reached out to the city with concerns of speeders. Too many cars were speeding in and around Melville schools, making the trip in and out of school each day a hazard for local students. The posted speed limit in school zones is 30 kph but cars were driving far faster.

The city doesn’t employ a full-time police department. The RCMP (Royal Canadian Mounted Police) patrols the area along with other neighboring cities. Police presence to prevent speeding outside Melville’s schools was not a realistic approach. But they wanted a way to enforce posted speed limits and protect their students from the dangers of speeding cars. The goal was to find a way to slow cars down while also pinpointing problem areas so that police could provide enforcement exactly when and where it was needed.

Melville put their desired specs out to bid and found the SafePace Evolution 15 radar signs from Traffic Logix. The Evolution signs actually came in under Melville’s budget and had even more than the features they were looking for. They purchased 9 of the signs to use in each of their school zones and at one local park.

The SafePace Evolution 15 is a driver activated radar sign with large 15” LED digits. A message displaying “Slow Down” is activated by drivers who speed. The sign offers a great visual reminder to drivers to notice their speeds and observe the speed limit. For most drivers, that’s enough. But drivers who continue to speed activate both the “Slow Down” message as well as a flashing strobe to alert them.

The signs are connected to the SafePace Cloud, a web-based program that gathers all the traffic stats from the signs in one easy to use interface. It provides Melville with detailed reports of where and when speeding is occurring. This lets them identify problem areas and provide the information to the RCMP, who can then provide extra patrols.

“Reports are one of the best parts for us,” said Jeremy Fairbarn, Melville’s Public Works Manager. “I can run multiple reports on speeds and volume and we can share them with RCMP for better enforcement and share them with City Council for better planning.”

The city is using the SafePace Cloud to run reports and manage the signs right from their desks.

“The cloud works very, very well,” said Mr. Fairburn. “We get all the data we need to take action when we need to and I can run reports right as I sit in my office.”

The city notified the community prior to the installation and received unanimously positive feedback. The schools are excited about the enhanced safety for students. And parents are thrilled that their children’s welfare is being seriously addressed with solutions to prevent speeding and crashes.

“The signs have really been well received,” Mr. Fairburn noted. “The community has really been on board.”