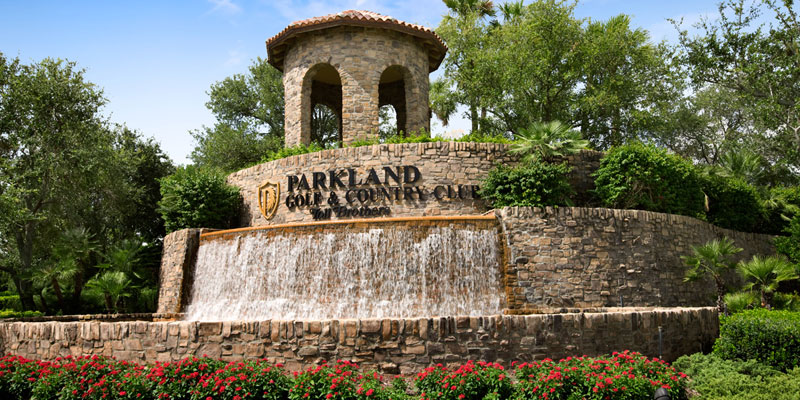 A dynamic, young community has a 91% decrease in speeding and transforms into a friendlier, more peaceful place when Guardian Pro cameras return safety to their streets.

Parkland Golf and Country Club is a dynamic young community. While it looks and feels like an upscale retirement community, it is actually primarily home to people in their 30s and 40s, often with young families. The luxurious community offers a combination of active recreational amenities, a beautiful golf course, and a stylish club and bar.

Speeding cars are not conducive to a tranquil, relaxing environment. They create unnecessary risk, cause unfortunate property damage, and make injuries and even fatalities more likely. Parkland HOA was dedicated to do whatever they needed to stop speeders and make community drivers more aware of their speeds.

The HOA spent considerable time conducting research into available options and exploring studies to determine how they could best mitigate speeding. They wanted a way to improve quality of life with a solution that had a track record of success and effectiveness. The goal was to find a solution that would keep community roads safe and calm but that would also be accepted and welcomed by community members.

Parkland chose the Guardian Pro speed cameras for their excellent track record, intuitive and user-friendly design, and web-enabled backend. They purchased six live cameras and installed two dummies as well. They spent considerable time explaining the system to homeowners, and while there was some initial pushback, people quickly began to appreciate the safer, calmer pace that the cameras brought to Parkland.

The Guardian Pro system includes a sophisticated speed camera that track vehicles in multiple lanes simultaneously with highly accurate Leddar technology. Images and videos of speeding drivers are instantly uploaded to the cloud where they can be viewed and reviewed by the HOA. Automatic warnings with customized Parkland branding can be sent to speed violators to warn or penalize them for dangerous driving.

When the Guardian pro cameras were first installed, a staggering 9,300 people were caught speeding. Just 8 weeks later, only 835 drivers were. The 91% decrease in speeders left Parkland pleased, and almost shocked.

“It’s just a dramatic decrease in speeding. It’s really surprising. [There’s] no way we could have imagined that it would be as effective as it turned out to be,” said Steve Thoms, Chair of Safety & Security at Parkland.

As people have begun to slow down, homeowners are pleased with the change of pace and calmer environment that the Guardian has created.

“The whole tone of a community can be changed with something as simple as mitigating speeding. You sense a different tone in the community; it’s more peaceful, has a friendlier feel to it,” reported Mr. Thoms.

Neighboring communities have noticed the difference as well.

“All of the surrounding communities are coming to us for advice on them,” remarked Mary Banmiller, the Property Manager at Parkland.

For Parkland Golf and Country Club, safer streets have become a way of life thanks to Guardian Pro cameras.

“Not only are the products well engineered and industry leading, but their customer service is just outstanding.”

“We can…. control the signs (at the port) right from our offices….. via the SafePace Cloud.”

“It (the SafePace radar sign) is a neat little system that gets fantastic results.”

“We love it (the SafePace radar sign)….. You’ll notice drivers instantly slow down. It really grabs their attention.”

“People really slow down and they don’t speed up afterward. It (the speed hump) is a reminder to observe the speed limit and it actually seems to work.”

“It’s really great how we can download the data and share it with team members….. The response to the signs has been excellent.”