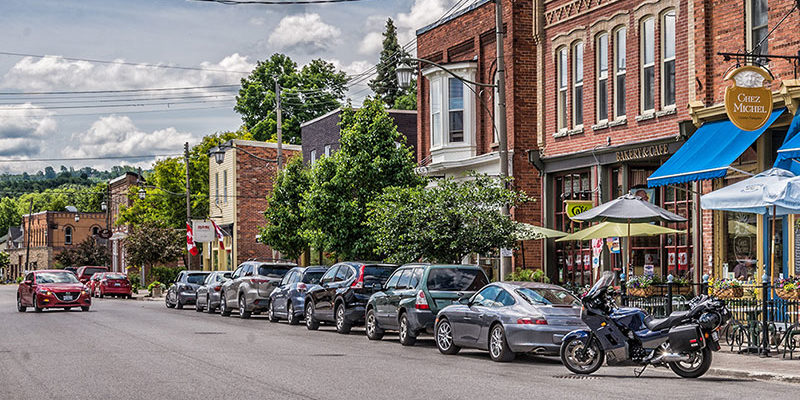 Clearview Township, ON is a rural community with rolling landscapes, historic neighborhoods, year-round festivals and a population of just under 14,000 locals. In its towns and villages, people enjoy the slow pace of rural life and the beauty of their environs.

Residents in Clearview Township were submitting complaints of speeding vehicles on their streets endangering pedestrians, cyclists, and the peace and calm of their neighborhoods. However, since bystander reports are not an accurate indicator of vehicle speed, actual traffic counts were needed to verify the complaints. The traditional on-road tubing used to conduct traffic counts was not ideal in Clearview due to snow concerns.

In addition to the challenge of off-road traffic counting, the township also needed an additional solution in place in the event that a speeding problem was determined to exist. Ideally, they wanted a solution that could inform them where and when speeding was taking place so that they could then enforce speed limits with police patrols and return safety to local streets.

City officials decided to first tackle the issue of a traffic counter that could work without being installed on road surfaces. Initial estimates were in the vicinity of $15,000 per system, a prohibitive cost considering that the township would still need to purchase additional solutions to tackle possible speeding.

Ideally, Clearview wanted to find a solution that could:

Gerry Lemay, the Public Works Director in Clearview, has become something of an unofficial spokesperson for the remarkable SafePace 100 speed signs. First encountered when he was working in Belleville, ON, the signs were used in Belleville to great success. When he switched to a new position in Ft. Murray, he brought his personal endorsement with him, and once again used the Safepace 100 to calm traffic on local roads. Now Director of Public Works in Clearview, Mr. Lemay’s enthusiasm for the abilities of the SafePace 100 sign has not waned.

When Clearview was looking into solutions in the $15,000 range just to monitor traffic, Mr. Lemay recommended the SafePace 100, which, at around a quarter of the price of the other systems, could not only count traffic, but also display speeds to drivers, and provide the township with valuable data regarding where and when speeding was taking place.

Mr. Lemay introduced the SafePace 100 to the township as “a neat little system that gets fantastic results.”

The Township contacted Traffic Logix, who sent a sales representative to do a demonstration of what the sign offered. The presentation was well received, and the township acquired their first SafePace 100 in late summer of 2015. The Township has since purchased another two signs in the winter of 2016 and has plans in place to buy more as needed.

The SafePace 100 signs are being used by Clearview to:

The SafePace 100 signs, which are simple to move and deploy, have already been used at 5 different locations in Clearview. Residents, city officials, and the local police department have welcomed the signs as remarkably easy to use, low-cost solutions with myriad benefits to the safety of the community.
The township’s enthusiasm for the sign has been contagious and has spread to the Community Policing Committee as well as to neighboring municipalities, three of which have purchased SafePace 100 signs as well. The Policing Committee has been so impressed by the signs’ capabilities that they have created a joint venture to improve road safety, conduct traffic counts, and promote community partnerships.
The SafePace 100 signs have:
Share this post
TweetShare on Twitter Pin itShare on Pinterest Share on FacebookShare on Facebook Share on LinkedInShare on LinkedIn

All You See is Brakelights