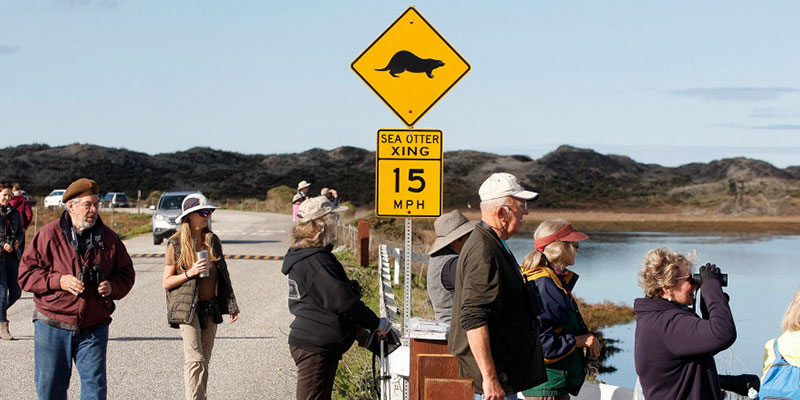 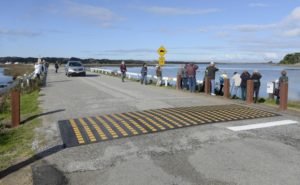 MOSS LANDING — After they were hunted to near extinction by the maritime fur trade in the 1800s, sea otters have had a bumpy road to recovery. Now, they’re getting a new layer of protection — two literal bumps in the road.

Two speed tables were recently installed at an entrance to Moss Landing State Beach to slow down traffic on Jetty Road. The project is an attempt to protect the sea otters who sometimes wander onto the road, as well as the people who come to observe them.

“Moss Landing is one of the most disturbed groups of sea otters anywhere in the Central Coast,” said Gena Bentall, program coordinator of Sea Otter Savvy, a research affiliate of Moss Landing Marine Laboratories. “They’re essentially living in an urban habitat.”

The first speed table was put in at Jetty Road in December, with the second in January. Since the project’s completion on Tuesday, there now are two synthetic speed humps at Jetty Road, two yellow signs and reflective white letters on the roadway. But instead of saying children crossing, it’s sea otters.

“As they’re driving through, people will see and feel the speed bumps and understand that this is an area where drivers need to slow down,” said Amy Palkovic, an environmental scientist with California State Parks, which oversaw this project.

The project was funded by a $12,600 grant from the California State Coastal Conservancy. The money came out of the Sea Otter Recovery Fund, which taxpayers can voluntarily opt into to help sea otter populations recover.

The project to install speed humps at Moss Landing State Beach is similar to a previous one at Moss Landing Road. After a beloved otter — nicknamed Mr. Enchilada by community members — died from being struck by a car in 2016, people were galvanized to protect sea otters.

The original synthetic speed bump at Moss Landing Road had to be removed due to compliance issues. The road wasn’t thick enough to hold the speed bump in place as heavy trucks laden with fish and other supplies drove over it to make deliveries in Moss Landing. That speed bump has since been replaced with one made of asphalt.